This is the introspective conclusion of my New Mexico Mega Post. Please read Parts 1, 2, and 3 if you have not already done so.

Even though my voyage to New Mexico is over, as with any adventure, the “journey” continues long after you return home. So, in the spirit of Big Blue Bear here are are a list of things which I learned and/or were affirmed to me during my three week trip to the Land of Enchantment. 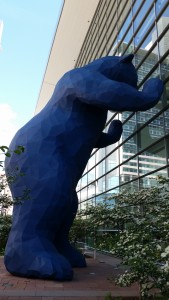 Things I “Learned” in Santa Fe:
aka, what I discovered while still peaking into the window of life, just like Big Blue Bear

1. I really, really, like Green Chile Cheeseburgers (and really anything with green chiles).

2. New Mexico isn’t a barren wasteland, in fact it has lush woodlands (though it most definitely has barren wastelands as well). It also has air so dry that your nose just sort of begins to break down, as do your lips. Also, Ravens and Crows are the lords of the sands and will happily consume your mortal soul if given the chance.

3. New Mexicans seemed to be a very humble people.

4. We really fucked over the Native Americans.

5. I mean we really fucked over the Native Americans.

6. New Mexico has a pretty good craft beer scene, not quite as big as Colorado’s but still impressive.

7. Santa Fe actually has an airport.

10. The Harvard connection is still a double-edged sword, but I’ve found it to be mostly beneficial. Those who hate us, want to be us, that sort of thing. It may sound arrogant, but I think it’s largely true.

11. Purdue is a surprisingly well known school in the West (and as a jab to IU – it is not).

12. Los Alamos not only has security on the edge of town, the guards have machine guns.

16. I am cursed with bad internet.

17. I haven’t forgotten how to drive.

19. Having friends is never a bad thing.

21. New Mexico is actually pretty liberal, who in the hell would have thought that?

22. Sometimes the people with the least, do indeed give the most.

23. Lobbyists aren’t all evil, in fact at least one of them is genuinely nice.

24. While I can’t speak for his qualities as an AG, New Mexican AG Hector Balderas was pretty cool when I met him.

28. I need to learn more about the stock market.

29. I still want to learn how to ski or snowboard.

31. I seem to really enjoy environmental law and policy issues, it doesn’t seem like a phase at this point.

33. New Mexico actually gets snow, and a fair amount of it at that.

34. Learning Spanish is probably the best way to devote any future language-learning time.

36. And on that note the Rocky West is pretty casual, I like that.

37. In fact I am going to go ahead and say that I am actively hoping and working towards starting a career in the Rocky West, it’s my favorite area of the country I’ve seen thus far.

38. Wherever I end up living I need ample sleep and exercise to be happy.

39. And, lastly, I am an impressive person. I don’t give myself much credit for anything I do – in fact I’m normally quick to engage in a hearty round of self-bashing, but really, I deserve to pat myself on the back from time to time. Going to New Mexico wasn’t the “easy” choice, the “easy” choice was to stay safely at home with SB and my bed, to take some blow-off class, and to mostly do nothing for three weeks. But the “easy” method is not the “Taco” method. It hit me one early morning in Santa Fe while I was out running. It was still pretty dark, and the distant Sangre de Cristo Mountains were only silhouetted against the earliest traces of dawn. It was bitterly cold and there was snow and ice. As my feet pounded against the ground with each stride, sending that familiar jolt of pain up my legs, I realized that I was blazing trails. I was in a town where I knew one person, who wasn’t even there, and I was thousands of miles from home, dancing in the dark. Was it safe to run in the dark where I was at? I had no idea at the time, but I was fine. Was I going to do ok at work? I had had no idea at the time, but I did wonderfully.  Was I even where I was supposed to be? I had no idea at the time, but yes, I was. See, it’s rarely the “easy” path that yields the greatest bounty. Could I have stayed home and did very little? Sure. Did I want to? Yes, I did. I can’t claim to be a person who always willingly jumps into the fray, but in the end, I always end up battling myself, pushing forward, prevailing. And as I ran down the dark streets, whose names I don’t remember, the icy air filling my lungs, I realized that I had earned every success I’d gained. I’m not the stuff of legends, but I am me, and while I don’t have much, I take much from little. I also take chances, and while I spend more time face down in the mud and the blood than many would care to admit, I always get right back up and progress forward. I don’t settle for safe, so I fly thousands of miles away to be a stranger in a strange land. I talk to stuffed pigs, dinosaurs, and bears and view them as my children. I make friends with squirrels, and I care more about the environment than would make some people comfortable. But at the end of the day, I am me, and just as I’ve pushed through years of intense pain in my legs, I’ve pushed through every hurdle these past couple of years has placed in my path. And, dear friend, that is something that makes running in the darkness of an icy cold New Mexican morning worth all the pain and suffering. Because in the end, easy is rarely worth it, so don’t let life pass you by. 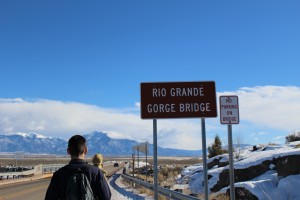