So I was ruminating about how to best “wrap up” my time in Denver, now that I’ve finalized the “Denver Check-in” series. At first I thought some sort of broad wrap up post was in order, but then I realized that it wasn’t really necessary as the ten check-ins pretty much covered everything about my specific experiences in Denver and that writing a post about them would be redundant. So, I decided to change course.

So, is a list of things I “learned” while I was in the Mile High City. Some of these are more “affirmances” than they are actual “learning,” but nonetheless all of these things kind of “popped up” during my 10.5 week-long stay in the Denver. As you will see, some of them aren’t related to law school or my internship at all, but this whole experience was actually much bigger than those topics. So, without further ado, here is the list: 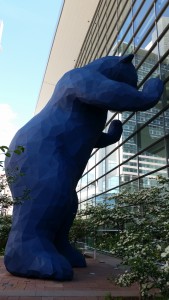 Things I “Learned” in Denver:
aka, what I discovered while peaking into the window of life, just like Big Blue Bear

1. I am a not a “big city” person. Which is weird because my “home” is in an even bigger city. This doesn’t necessarily mean I wouldn’t work in a big city, it just means I don’t actually want to live in the metro-center of it, as I did in Denver.

2. I am not a “small town” person either. While I have no desire to live in a big city, if I am going to shirk-off people, I’d rather live in the woods than in a small town. If you are trying to avoid people, you might as well do it properly and it’s not like a small town provides any entertainment you’d lack living in the wilderness.

3. Colorado does have the legendary blue skies everyone says it does, but it also rains a lot more than I was lead to believe.

4. The Rocky Mountains are amazing.

6. Left to my own devices I would probably be one of those people who dies a millionaire with little to show for it aside from being a millionaire. I spend very little money. This was true in Denmark as well, where I came in at a whopping 1/3 of my budget. I am very much a scrooge when I am by myself. But that doesn’t mean I don’t do things, I will buy experiences, I just won’t buy things.

7. Except beer. I could drink a beer every day for the rest of my life and be a happy camper. If you look at beer, on a per-drink scale, I spend more on beer than I do on food, which isn’t really saying much, because I don’t like to “Go out for drinks” – I’d rather buy the 6 pack and drink it at home, for only twice the cost of one beer out.

8. I value a good living environment over just about any other amenity. Because I am a homebody, and not someone who is out and about, I want a good home, at the exclusion of other things if necessary. This does not mean I want a large, or a fancy home, just a good one. In fact, I could live in a very small space and probably be quite fine. My Denver apartment was not a good one, despite having some amenities, most of them were dated (internet, *cough*), and really the building was home to people I’d mostly rather not live around.

9. I have to have good internet. I actually don’t need to use the internet as much as I thought I would (excluding classes). That said, when I need it, I want it to work. I don’t necessarily need super-fast internet, I just need reliable, working internet. My Denver apartment had internet so bad it shouldn’t exist in the mainland United States.

10. I really don’t care about law school, I care about what role it fills in my life path.

11. I know I want to work with environmental issues. I do not know exactly what role I want to play. But this is my “area,” even if I don’t end up a lawyer.

12. On a similar note, I sometimes worry that I’m on the wrong path entirely to reach my environmental goals.

13. However, I do know that I at least have the capacity to be a lawyer, come what may.

14. Trains are vastly preferable to buses, even when you are a sardine and the bus is cheaper.

15. I need to live someplace where I can exercise. Be that access to a small workout room, a full-scale gym, or just an area conducive to outdoor activities (without a heightened risk of being mowed down by a car or shot, preferably).

16. Some people will hate you because of Harvard, others will think you are better than you actually are. Few will understand that Harvard doesn’t increase, or decrease, a person’s worth in and of itself.

19. I seriously doubt I will ever want human children. Ever. This feeling is only getting stronger as time passes, rather than lessening.

20. I am less angry when I am in the great outdoors.

21. While living away from SB isn’t ideal or desirable, I am perfectly capable of taking care of myself. But when I am with SB I want her to take care of me. 🙂

22. Living with two strangers is one stranger too many (especially when you only signed up to live with one stranger).

23. People in at least one area of the Government work much harder than you give them credit for and their jobs are largely thankless. Hate them all you like, but they are not lazy people. Fighting billion-dollar companies tooth and nail is draining work.

24. A government legal office is a weird environment. Everyone is stressed, but not in the “suicide or drug-addiction” sort of way most Biglaw lawyers seem to exude. It’s like everyone has accepted that they will never make anywhere as much money as their friends who went into private practice, but they oddly don’t care – yet at the same time, the lack of massive compensation makes them take more personal blows in the day-to-day work, even if these blows don’t result in being fired, like in Biglaw.

25. I struggle between despising homeless people and trying to figure out how to best help them and sympathizing with their systemic oppression. While this might sound cruel, you have no say in the matter until you’ve been harassed by them every single day. This is especially true for the mentally unstable ones who threaten you with violence, even if they’ve never acted on it.

26. That said, most city people don’t give a shit about you, and that is pretty cool most of the time. While there is something to be said about small-town folk having your back, I’ve found I prefer people who don’t realize I exist.

27. Getting the top of your feet sunburnt is terrible. Don’t do it.

28. Speaking of feet, my fancy brown shoes are not water proof at all, even when I’ve sprayed them with the Kiwi water protector. It’s because of where the shoe attaches to the sole, it just lets water right in, to ridiculous proportions. Which is really dumb, because the rest of the shoe is highly water resistant.

29. Being a volunteer is liberating in a lot of ways.

30. I like “counting down” to things, often more than I do the actual thing itself.

31. I want to learn how to ski and/or snowboard.

32. I’ll probably never get into cycling because you need to spend 5,000$ to get started properly.

33. Coors is a better brewery than you give it credit for (but Coors Light still sucks).

34. I can play a computer game with my friends for an hour or three once a week, or once every other week, and feel perfectly content with my amount of human contact. [I just need working internet]

35. I’ll probably play video games for my entire life, even if my 17 hour long LAN parties are a thing of the long past (which I really don’t miss that often, to be honest).

36. Somehow I don’t tire of eating the same breakfast and lunch every single day (and I do mean the exact same), but I do want dinner to be different each day.

37. I can go months without watching television and not be bothered in the least (this includes things like Netflix).

38. I wish I read for pleasure more than I do, but it’s hard to motivate myself to read after reading all day.

And there we have it, an incomplete list of things I learned. I could never really recount everything I learned, but I think this is a good start. I think at the end of the day we are all sort of like Big Blue Bear. We are both part of the action, as well as an observer of the action. This was a challenging summer for me in a lot of ways, but the point is that I got through it, even when I was just kind of flying by the seat of my pants. I was very fortunate to have the experiences that I did, both with strangers, friends, co-workers, and family. It’s important while undergoing these kinds of adventures that you always keep in mind just how fortunate you are, after all It’s up to us to make sure that life doesn’t pass us by. 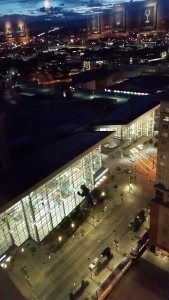